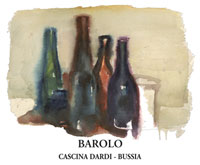 Two brothers, Alessandro and Gian Natale Fantino, run this family estate in Monforte d’Alba. Alessandro managed the vineyards and served as the enologist at Cantina Bartolo Mascarello for 20 years, from 1978 to 1997. Since 1998, he has dedicated himself to running his family estate alongside his brother full-time.

The brothers farm eight hectares in the heart of the historic Bussia cru north of Monforte, one of Barolo’s most famous areas for producing wines of great longevity and finesse. The Fantino holdings are concentrated exclusively in the “Dardi” section of Bussia, a hillside with perfect southern and southeastern exposure in the geographic center of Bussia. This gives them their “Cascina Dardi” brand name on the label of their Barbera and Baroli (for those already familiar with these wines, they were formerly labeled as Vigna dei Dardi, before the brothers registered the Cascina Dardi trademark).

Barolos from Bussia tend to have deep color and rich fruit and while they don’t lack the classic tannic structure of Nebbiolo from this part of the world, they are not nearly as hard as the Barolos from the southside of Monforte or from Serralunga. This fact does not preclude the Fantino Baroli from aging but makes them delightfully approachable relatively young. The Fantinos are also blessed with some of the oldest vines in the entire Barolo zone, thanks to the fastidious care given to them by Alessandro and Gian Natale. Planted in 1946 and 1947 and pruned in an old style that is very labor intensive, they produce grapes that would be the envy of any Barolista.

The Fantino brothers produce an amazing Barbera d’Alba from these ancient vines in Dardi, and a “Rosso dei Dardi” from younger vine Nebbiolo planted on a west-facing slope. The Barbera is loaded with lush fruit and smooth, silky texture, and a ravishing perfume. The Rosso is playful, fruit-driven, fresh, and aromatic. They are also specialists with several traditional Piemontese wines that are mostly disappearing: Nebbiolo Passito and Barolo Chinato.

Barolo “Cascina Dardi”:
• Fermented for 25 to 30 days in stainless steel tank
• Aged in large, Slavonian oak barrels for 4 years
• Aged in bottle for 6 months before release

Vino Rosso “Laboro Disobedient”:
• Fermented for 25 to 30 days in Slavonian oak
• A declassified Riserva, aged in large, old, Slavonian oak barrels for five and a half years
• Aged in bottle for 12 months before release

Barolo Vigne Vecchie “Cascina Dardi” :
• Fermented for 25 to 30 days in stainless steel tank
• Aged in large, Slavonian oak barrels for 38 to 40 months after fermentation (2 years in large, older barrels, 1 year in 2- to 3-year-old barriques)
• After barrel aging, aged in bottle until domaine decides to release wine
• Maximum of 250 cases produced per vintage
• 2013 was final vintage produced of this wine

Nepas:
• A Nebbiolo passito wine
• Harvested early to retain acidity and dried on straw mats
• Pressed in late December and fermented dry
• Aged in barriques for 6 years
• Aged in bottle for 24 months before release

MISCELLANEA
Vino Rosso “Laboro Disobedient”:
The 2005 Laboro Disubbidiente was originally meant to be the Fantino’s 2005 Barolo Riserva, but bureaucratic red-tape and a series of miscommunications led to the Fantino brothers missing the deadline to have their wine certified as “Riserva.” “Laboro”, an anagram from Barolo, pays homage the hard work the brothers put into making the wine. “Disubbidiente” means disobedient, referencing the brothers’ act of rebellion against the Barolo appellation authorities by releasing the wine on their own terms under a new name. The label was design by Sergio Staino, an Italian comics artist and writer. Following the success of the 2005 vintage, the Fantino brothers decided to continue producing wine in the tradition style of the original “Disobedient” beginning with the 2010 vintage.