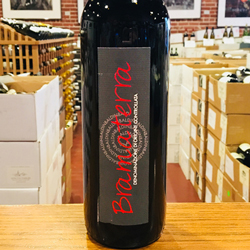 To say that the DOC of Bramaterra is in the northern area of Piedmont is an understatement. Bramaterra is about the same distance from Zermatt, Switzerland to the north as Barolo is from the Ligurian coast to the south, benefiting from more of a mountainous than a maritime climatic influence. It’s another world, another terroir, and another culture from what we now consider to be the traditional Nebbiolo country of Barolo and Barbaresco. One highlight of these differences is that in these northern parts, Nebbiolo is grown, but it’s referred to by its local name, Spanna.

Enter Matteo Baldin, who in 1997 began making wine in a minuscule cellar he inherited from his maternal grandparents. Previous to the launch of his own estate, Matteo worked in nearby Gattinara. His calling, though, was always to return to his home village of Lozzolo to make Bramaterra DOC.

Matteo is a fierce advocate of the Bramaterra style. Unlike the many other Nebbiolo focused appellations of Piedmont, Bramaterra can have up to 20% Croatina. Though there is a trend away from using larger amounts of Croatina in his village, he believes that to make an elegant and typical Bramaterra, you need to stick with the traditional blend and work hard to achieve optimal maturity of each grape.

His plantings are modest with just 1.5 total hectares planted to vine, on slopes rich in clay and volcanic porphyry. The vines are densely planted, Guyot trained, and receive organic treatments. Matteo’s goal is to obtain high quality grapes with low yields.

Matteo is a focused and driven individual, carving out a living in a way that few choose to these days. His approach to wine and life are deeply intertwined:

“The terroir must emerge and balanced wines better speak my language of simplicity. Speaking through the wine, the aromas, and the flavor of my land, all makes me happy, satisfied. Balance, simplicity, terroir, instinct. These are my cardinal points. This is my little cellar.”