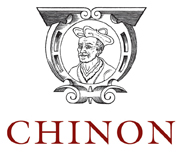 The wines of Chinon have long been celebrated. French humanist and native son, François Rabelais, sang their praises as far back as the sixteenth century. However, the distinction with which the appellation is regarded today is due in part to the legacy left by a more contemporary icon: Charles Joguet. This young painter and sculptor abandoned a budding art career to assume direction of the family domaine in 1957. He soon began to question the common practice of selling grapes to negociants, as his own family had done for years.

The Joguets owned prime vineyard land in between the Loire and Vienne Rivers, with some of their finest found on the left bank of the Vienne, just outside Chinon, in Sazilly. These very lieux-dits had been recognized for their character and defined before the Renaissance—some even date back to the Middle Ages. Variations in the soils of these alluvial plains were substantial enough to realize that he was sitting on what would be considered in other regions as premier cru and grand cru vineyards. To sell the grapes off or to vinify these individualized plots together would have been madness. Separate terroirs, he believed, necessitate separate vinifications. Over the course of his tenure, Charles took the risks necessary to master the single-vineyard bottling with an artistry that A.O.C. Chinon had never before seen. In so doing, he realized the true potential of the land.

Charles has since retired. Today, the young, eager, and talented Kevin Fontaine oversees the vineyards and the cellars. He and his team farm thirty-six hectares of Cabernet Franc. Closely adhering to the tradition of Charles, the domaine bottles nine different cuvées, handling each one as a unique terroir and microclimate with individualized care and attention.  That ethic trickles into the cellars as well, where careful deliberation and experimentation bring about gradual change.

The wines are divided into two lines: precocious cuvées and those for long-aging. Precocious cuvées, like the “Cuvée Terroir” and “Les Petites Roches” (Little Rocks), are made to be consumed young. If premier crus were permitted in Chinon, Les Varennes du Grand Clos would certainly be considered one of them. Clos du Chêne Vert and Clos de la Dioterie are perhaps their greatest wines—certainly of grand cru quality—with excellent aging potential. Those who are convinced that the best Cabernet Franc grows in Bordeaux may quickly transfer their allegiance to the Loire upon tasting these classic, appellation-defining Chinons. The purity of fruit, the exceptional delineation of aromas and flavors, the soulful reflection of terroirs, and the extraordinary seductiveness of the texture make the wines from Joguet second to none.

Chinon Blanc “Les Charmes” & Touraine Moelleux Clos de la Plante Martin:
• Vineyard is situated on the left bank of the Vienne River, on the edge of A.O.C. Chinon, a clay and limestone soil that is ideal for growing Chenin Blanc
• Incredibly low yields of 20-30 hl/ha, sometimes even less
• Grapes are harvested in several passages, according to the maturity of the grapes
• Grapes are pressed gently by pneumatic press
• Must is racked to ferment in 225-L barrels, only 1/3 of which are new
• Slow, cold fermentations to reveal the aromas and structure of the Chenin Blanc
• Regular stirring of fine lees
• Fermentation lasts for approximately three months
• Wines age for 4-6 months after fermentation
• Wines are assembled in stainless steel, where they rest until bottling

Chinon Rosé:
• Made by direct press
• Long, slow fermentations at cooler temperatures in stainless steel
• The wine does not undergo malolactic fermentation – a choice made to keep the freshness of the grapes

Chinon “Cuvée Terroir” :
• A blend between a parcel from Beaumont-en-Véron with the alluvial soils of the left bank of the Vienne River, along with press wine from all the other cuvées of the domaine. Blend aims to highlight the harmony of Chinon’s terroirs
• A cold maceration begins a fast fermentation at warmer temperatures, lasting for ten days
• Malolactic fermentation takes place in cuve over the course of the winter months
• After several rackings, the wine ages in cuve and is then bottled

Chinon “Les Petites Roches” :
• Cuvée assembles parcels from terrains of gravelly, siliceous alluvial sands and limestone
• Same vinification as in the “Cuvée Terroir” but with specific vines selected for the density and complexity they impart on the wine
• This juice represents the free-run wine (le vin de goutte) of several parcels; only high-quality pressed juice is added to this blend

Chinon Les Varennes du Grand Clos :
• Single-vineyard is situated at the foot of a gravelly terrace with an eroding limestone slope on the left bank of the Vienne River in Sazilly
• Yields average 40 hl/ha Cold skin maceration last for five days
• Fermentation lasts for a maximum of 4 weeks, at higher temperatures than most cuvées
• Well-adapted pump-overs and punch-downs
• At the end of alcoholic fermentation, the free-run wines and the best of the pressed wines are blended for malolactic fermentation in 1-3 year-old barrels
• Wine ages in oak fûts for 15-16 months, depending on the vintage
• After racking, the finished wine rests assembled in cuve for two months before bottling

Chinon Clos du Chêne Vert :
• Vineyard is a mythical location in Chinon, situated directly in the small city of Chinon on the right bank of the Vienne River, named for a monumental Green Oak tree that hangs over the parcel—a replanting of another old oak that lived for 800 years and was planted by the Abbey of Bourgueil in the 12th century
• A very steep bank with south-western sun exposure; one of the oldest lieux-dit in the A.O.C.
• Yields average 30 hl/ha
• Excellent sun exposure normally equates to one of the earliest parcels to be harvested
• Same length of maceration and vinification as Les Varennes du Grand Clos
• Regular pump-overs and punch-downs
• Alcoholic fermentations are sometimes followed by malolactic fermentation on the marc, to showcase more suppleness and body
• Prolonged aging in 1-3 year-old barrels for 18 months
• One of Joguet’s most age-worthy cuvées

Chinon Clos de la Dioterie :
• Single-vineyard parcel situated right next to the winery, dominating Les Varennes du Grand Clos with the domaine’s oldest vines (northeastern sun exposure)
• Old vines limit yields naturally to an average of 30 hl/ha
• The last parcel harvested every year
• Grapes are cared for with special attention given to the fragility of the vines
• Almost the same vinification techniques for Clos du Chêne Vert, with slight modifications made for Dioterie, according to the constraints set by each vintage
• Aging same as Clos du Chêne Vert 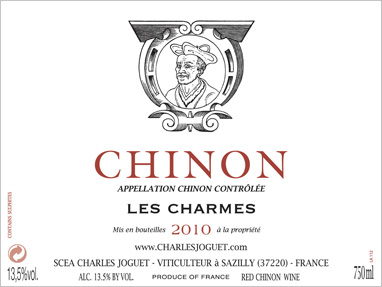 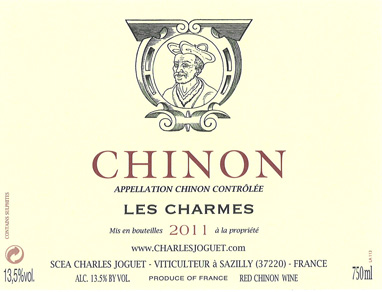 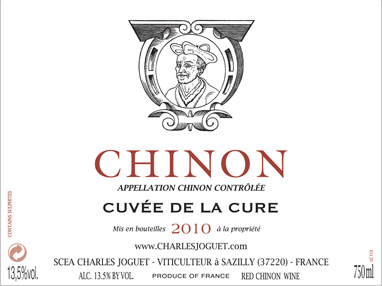 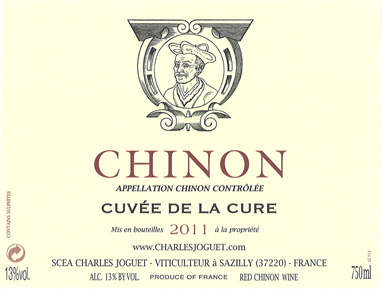 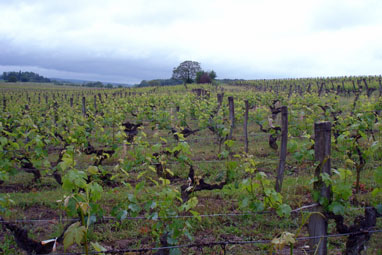 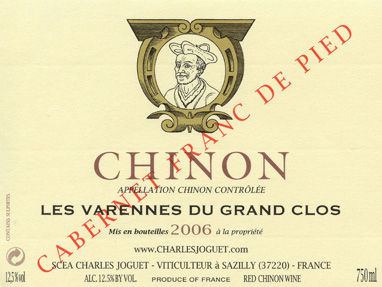 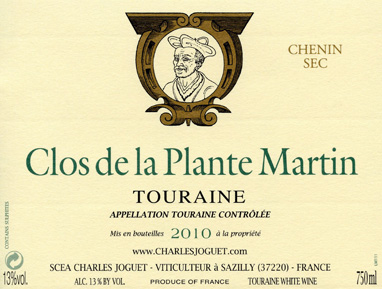 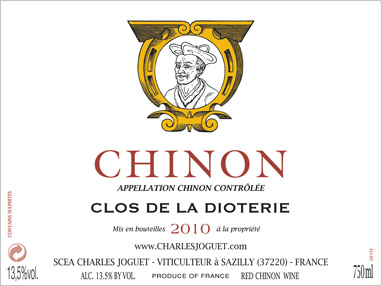 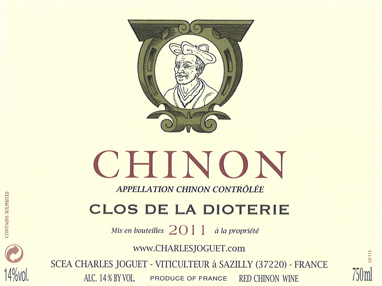 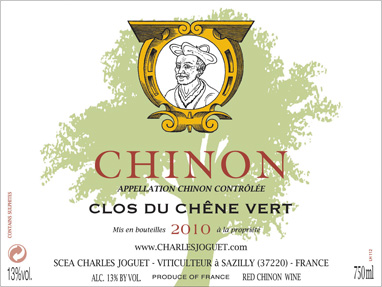 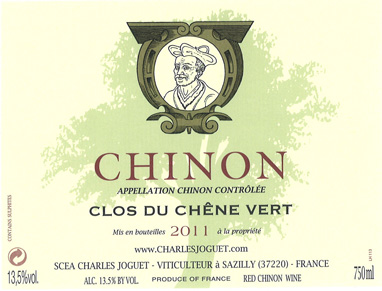 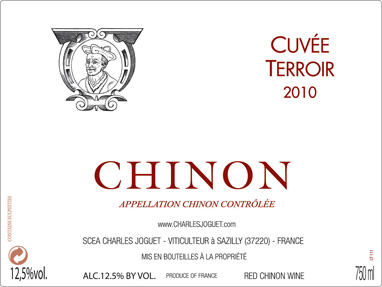 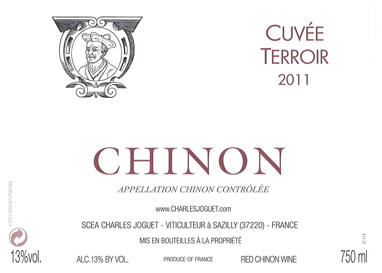 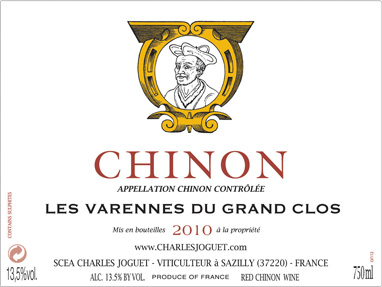 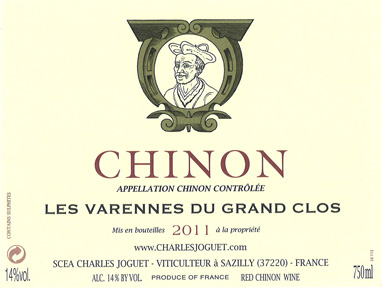 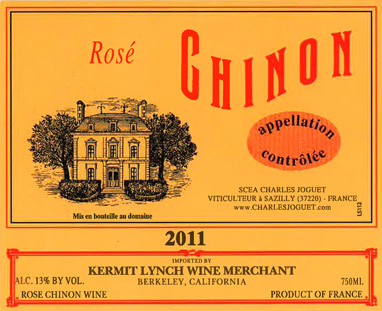 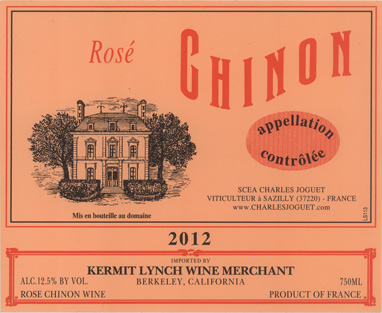 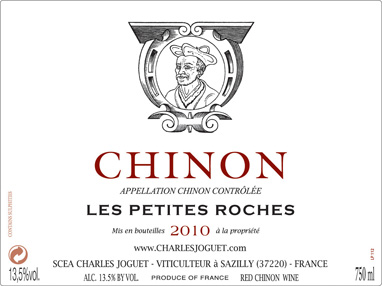 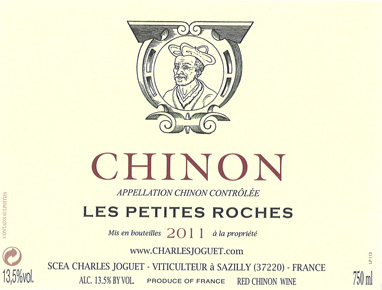 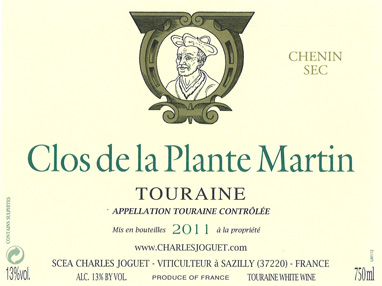 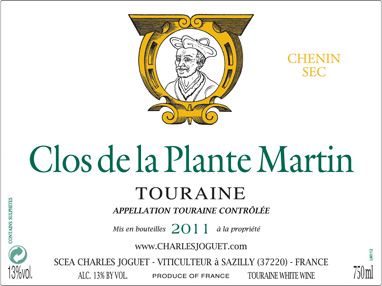