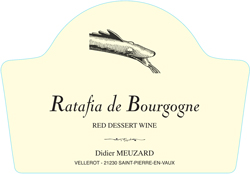 Growing up, Didier Meuzard, like many in Burgundy, didn’t drink much ratafia. He may have been born and raised in a rural, forgotten corner of the region once celebrated near and far for the beverage, and he may today be the most acclaimed producer of it, but for a long time it wasn’t something that he gave much consideration to. The art of artisanal ratafia-making was on the verge of disappearing, along with the art of craft distillation.

Didier left the region as a young man for better opportunities and soon found himself climbing the corporate ladder far from home. After several years of climbing, Didier “burned out,” as he calls it, and his doctor told him that, if he wanted to live much longer, he’d better change career paths and do it quick. The doctor probably did not have in mind becoming a master distiller, but that’s just what Didier did.

One day back in 1996, shortly after leaving his job and returning to Burgundy, while out for a walk, Didier stumbled upon an old man working a still in a town square. It was shortly after harvest, and vignerons were bringing their lees and grape pomace to the still for the distiller to make spirits. They began talking and tasting and soon hit it off. Didier was captivated by the smells, the mystique, and the mechanics of the nineteenth-century machine. The old man, sensing Didier’s interest, invited him to come back the next day, and the next; before long, the distiller had found his successor and Didier had found his calling.

He brought the still to his village at Saint-Pierre-en-Vaux, to an old family farmhouse his uncle had been watching over. The barn was in awful shape, with large cracks in the stone walls and holes dotted all over the tiled roof. His uncle, outraged at the pigeons nesting in the barn, would often take his shotgun and shoot at them, from the inside. “He was a bit unusual,” Didier says with a grin. All this, though, was perfect for his project. He had retained as much information as he could from the old man, including the fact that you need to give your distilled spirits a good dose of cold in the winter, to settle and clarify the spirit, and a good dose of heat in the summer, to blow off all the harsh, alcoholic volatile notes from the bouquet. He had dutifully noted to keep only the finest lees from the best, most naturally working domaines, to distill into fine, and to keep only the best, organically grown grape pomace to distill into marc. He learned to keep only the heart—or the middle part—of the distilled liquid, as it’s the purest, cleanest part of the process. With this and countless other details in mind, Didier was soon making some of the best and most reputable fine de Bourgogne and marc de Bourgogne in the region.

Once he had that worked out, he set out to re-think and re-master ratafia from the start. Most ratafia was (and still is) made with white juice, muted with marc de Bourgogne. For starters, Didier wanted his ratafia to be red, and muted with the softer, smoother fine de Bourgogne. The goal was to change the perception of ratafia from rustic to elegant, harsh to gentle. Working with some top growers in the Côte de Nuits, Didier takes freshly harvested Pinot Noir and Gamay grapes and puts them in tank, exactly as if he were going to make a red wine. The trick is to prevent the juice from beginning to ferment (otherwise the taste of the juice will be negatively altered, with less fresh grape flavor) and to do this without adding any sulfur (which can effectively kill yeast, but will also harm the purity of flavors in the juice). So the tanks are set outside, where the cold keeps the yeasts from acting up right away. Didier pushes the maceration as far as he can go before the yeasts finally get to work, which can be anywhere from four to ten days, allowing maximum color, tannins, and aromatics from the grape skins to seep into the juice. As soon as Didier tastes fermentation on the horizon, he presses off the juice from the skins and then cuts it with one-year-old fine (of his own production, of course), following the traditional ratio of two-thirds grape must, one-third spirit. The spirit kills off the yeast and the ratafia is born. Didier puts it in old enameled tanks for several months, constantly tasting. When all is harmonious, he bottles his tank, by hand, one bottle at a time.

The result? Aromas of earth, red Burgundy, and fresh fruit, with only the slightest hint of the fine, which stays in the background and lets the fruit do the talking. The palate is soft and velvety, and the sweetness is tamed and enhanced by the fine, with all coming together seamlessly. You can drink it with dessert, certainly, but you can also do as Didier suggests and just drink it on its own. Didier does recommend drinking it at cellar temperature, with just the slightest chill. There’s no need to finish the bottle with any great haste. It will keep several months once opened, much like a great port.

You may wonder why the label has an eel on it, of all things. Didier’s first still, the one he got back in 1996, was handmade back in 1860, and the maker’s mark was that small eel engraved on the swan neck of the still. About ten years ago, Didier had to retire that old still and got a much more modern version . . . from 1902! As an homage to his first still, its maker, and the old man who left him the keys, Didier had a copper eel spout made for his current still and added the image to his label.

• 2/3 Grape juice and 1/3 Fine de Bourgogne (the softest distilled grape alcohol distilled from the lees)
• Lees sourced from biodynamic and organic growers in the Côte de Nuits
• Grapes for juice are purchased from Côteaux Bourguignons vineyards
• Grapes are macerated in tank as if they were to make red wine. Tanks are kept outside to keep them cold enough to prevent fermentation from starting. Maceration lasts 4 to 10 days—up until right before fermentation starts.
• No sulfur is used during maceration
• Vineyards are co-planted with Pinot Noir and Gamay (majority Pinot Noir), exact percentage is unknown
• Made in enamel lined tanks of stainless steel tanks
• After grape juice and fine is blended, ratafia is aged a minimum of two years in enamel lined stainless steel tank
• Neither fined nor filtered
• Serve cold 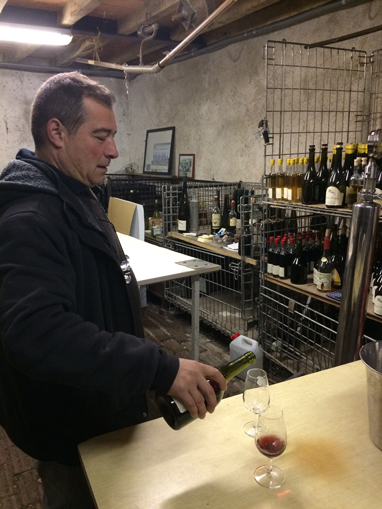 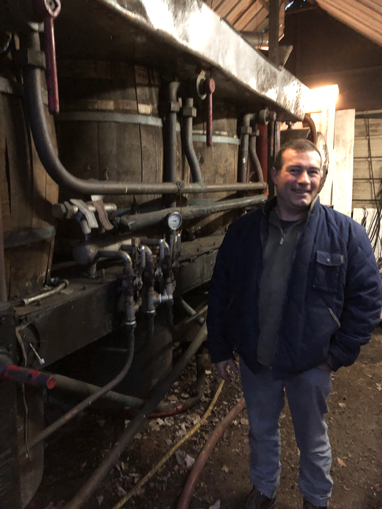 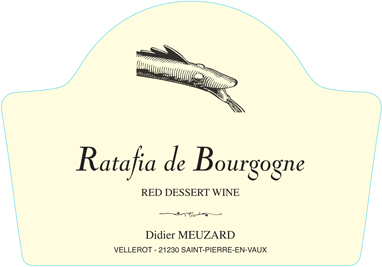