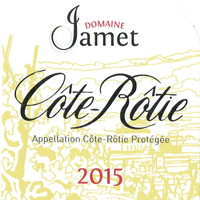 Jean-Paul Jamet began his career in the vineyards of Côte Rôtie in 1976 at the age of 16, working with his father, Joseph, who bottled his first wine that year. Jean-Paul told us that he often found himself working alongside one of our former growers Marius Gentaz, whose vines in Côte Brune bordered his own. With the 2016 vintage, Jean-Paul celebrated his 40th year growing and vinifying Côte Rôtie. His experience with his enviable collection of sixteen (soon to be nineteen) lieux-dits spread across the best sites of the appellation has given him deep knowledge of how to unlock the greatest expression of Côte Rôtie from its wide spectrum of terroirs. This savoir-faire makes Jamet the modern day master of the appellation.

The Jamet path has been one that has stayed true to tradition as the appellation has modernized around him. Despite its popularity, Jamet always eschewed the use of excessive new oak but instead chose to maintain a cellar full of the traditional aging vessel of Côte Rôtie: the demi-muid. As the fashion to de-stem Syrah accelerated, Jamet remained firmly opposed, continuing to vinify his Syrah whole-cluster. Perhaps most importantly, Jamet remained committed to his extreme, impossibly steep and rocky, treacherously terraced parcels that could only be worked painstakingly by hand. Planting Côte Rôtie on the plateau or leveling his vineyards to be able to plant on flatter sites and work them more easily were not part of his repertoire. The Jamets have been avid planters over the past four decades, giving them an incredibly diverse collection of raw material that leaves them poised to continue making great wine uninterrupted for generations to come. Jamet also resisted the urge to produce a series of limited single vineyard cuvées, despite the ease and price at which he knew they could be sold, preferring instead to produce a representative blend of the entire appellation. The sole exception is that part of his Côte Brune vineyard is bottled apart, as he esteems this vineyard capable of providing, on its own, the synthesis of his entire cellar. His complex, balanced, age-worthy, classic Côte Rôtie bottling is the beneficiary of this philosophy.

As all of the various trends of modernization and experimentation have run their course in the appellation, Jamet’s wines are justly recognized as the pinnacle of traditional Côte Rôtie being produced today. His strategy to follow the path laid out by his ancestors before him kept him closest to what is most important: his land and its purest and most authentic expression. Jean-Paul Jamet is joined today at the domaine by both his wife, Corinne, and his son, Loïc. As he completes his 42nd harvest in 2018, we are proud to welcome him and his family into the KLWM family of vigneron artisans.

Condrieu “Vernillon”:
• Named Vernillon because it is a blend of two parcels, Vernon and Côte Châtillon
• Both parcels are in the commune of Condrieu, in the northern part of the appellation
• Vernon is next to the Coteau de Chéry, with eastern exposition, and biotite granite soil
• Châtillon is the northernmost parcel of Condrieu, with muscovite granite soil
• Aged in a blend of stainless steel, barrique, and sandstone amphora
• Completes malolactic fermentation
• Aged 9 months
• Their first vintage of Condrieu was 2015

Côte Rôtie “Côte Brune”:
• A single lieu-dit bottling
• Produced every year for last 40 years
• In some years, a portion of Côte Brune is also blended into the Côte Rôtie
• Aged 22 months in demi-muid and barrique 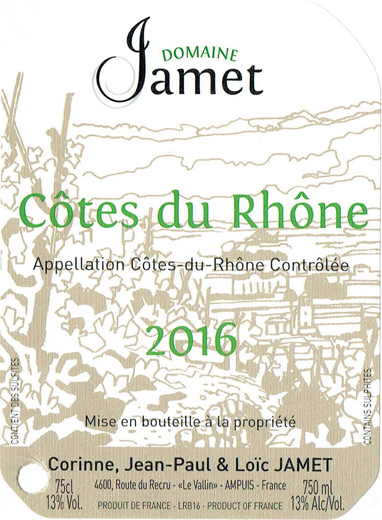 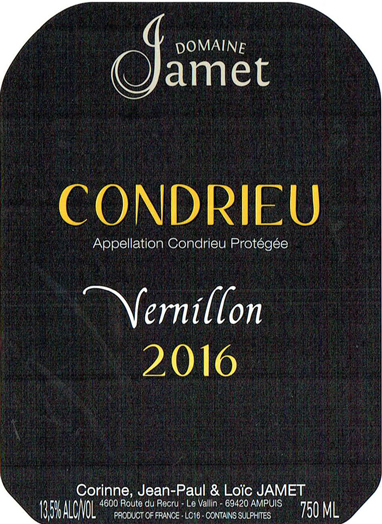 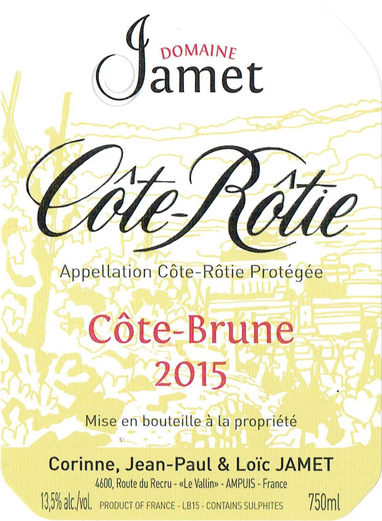 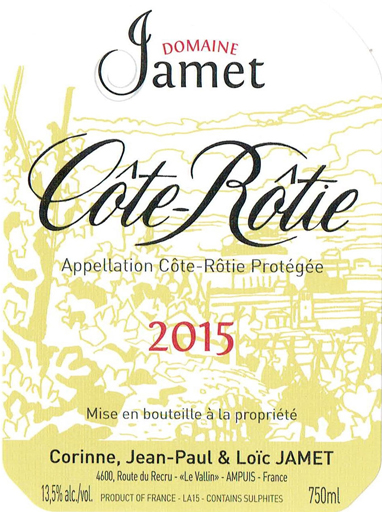 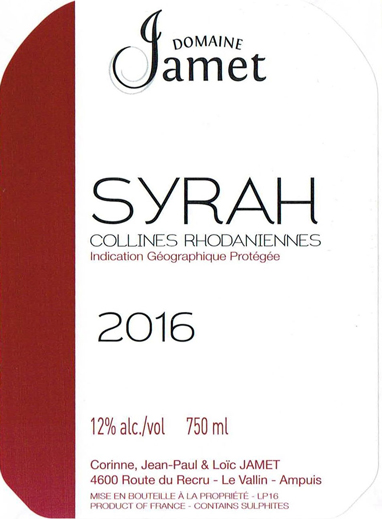