Domaine Les Mille Vignes
Not until Jacques Guérin retired from his post as an oenology professor in Orange did he found Domaine Les Mille Vignes. In the late 1970s, he moved to the tiny Languedoc-Roussillon village of La Palme, just a stone’s throw from the Mediterranean. Soon after, he began producing wine from nearby Fitou and Rivesaltes. The wines produced in the area at the time were certainly not driven by quality, but Jacques saw potential in the terroir and had a vision to revitalize his vineyards, focusing on low yields and organic principles, convinced that he would soon be able to produce great wine. Today, Jacques’ daughter, Valérie Guérin has carried on his ethic in the vineyard and cellar.

Fitou produces exclusively red wine and in 1948, became the first Languedoc AOC. The terroir is an amalgam of strong natural elements: clay, limestone, and schist soils; wild scrubland scented with thyme and lavender, and perhaps the most potent force of all, Tramontagne—a fierce wind that sometimes seems it will never stop blowing. Rivesaltes and Muscat de Rivesaltes are both Vin Doux Naturels (a designation for naturally sweet wines from southern France) and are produced within the borders of the Fitou appellation. Rivesaltes can be a variation of colors and styles, though always sweet and fortified like its Muscat counterpart.

Valérie’s wines have gained an ardent following in Paris and it was from the sommelier at the Parisian restaurant “Frenchie” that Kermit first heard of Les Mille Vignes. During the summer of 2013 Kermit visited the domaine and returned saying that “everything I tasted was beyond marvelous.” These are the wines that he raved about in his 2013 NY Times Magazine interview. The addition of Les Mille Vignes to our portfolio not only geographically fills in the space between Banyuls and Corbières but adds true depth and variety to our wines from the Languedoc-Roussillon.

IGP Pays de l'aude Rouge “Chasse-Filou”
Chasser means to chase in French. Filou is a dated term one could loosely translate to villain but also, more affectionately, rascal. So, literally it's a rascal-chaser. This is inspired by a text by French poet, writer, songwriter Boris Vian from 1956, called La Complainte du Progrès. In this song Vian creates names for imaginary household tools and Chasse-Filou is (from what Valérie tells me) the one used to chase the "Filou" who comes to see Madame when Monsieur is not around... It is also a play on words with the appellation Fitou as this wine, labeled as a IGP, has chased the “Fitou” from its appellation.

Fitou “Cadette”
A wink to Valérie’s younger sister (in French "cadet/cadette" is often used instead of "plus jeune" to describe the age difference between siblings).

Fitou “Les Vendangeurs de la Violette”
This wine comes from the original parcel of the domaine, planted with 1000 vines, hence the domaine's name. There are wild violets growing all around the parcel. The staff of the domaine and a group of friends, not hired harvesters, has always done the picking for this parcel. So the cuvée name is a reference to the violets growing in the vineyard and an homage to the people harvesting the grapes.

Fitou “Atsuko”
In the late 1990s a group of Japanese diplomats living in France discovered Mille Vignes and asked if they could come visit. Valérie’s father Jacques lead the diplomats and their wives on a tour of the domaine and the vineyards and a tasting of the wines. The delegation was lead by the second in command of the Japanese embassy in Paris. He came back in early 2000 and asked Jacques why he didn't make a 100% Grenache cuvée. Jacques liked the idea a lot and made the first Atsuko from the 2000 harvest. All of the fruit comes from one parcel of old Grenache wines (about 60 years old at the time). To thank the Japanese diplomat for his good idea, the cuvée was named after his wife, Atsuko. It means “Blossoming Cherry Tree” in Japanese, which also works nicely with the aromas of fresh, ripe cherry Grenache the wine sometimes shows. In order to maintain the exceptional character of this cuvée, it is only produced in exceptional years for Grenache and always in small quantities (2000 - 2600 bottles). After the initial vintage, there was no Atsuko until 2007. Since then, there have been considerably more good vintages for Grenache (all of them, actually), so Atsuko has been produced more regularly but still at a maximum of about 200 cases.

Fitou “Dennis Royal”
The name is an homage to a close American friend of the Guérin family who passed away: Dennis Royal Clark. He first met Jacques Guérin 7 years ago when he was looking into buying a domaine in France and Jacques helped him with advice as to what was worth his investment or not. DR Clark never ended up buying a domaine as whatever he and Jacques visited didn’t live up to Jacques’ standards when it came to the quality and state of the vineyards, so instead, DR Clark bought a house in the village of La Palme, where Mille Vignes is located. He and his wife have since participated in each harvest at Mille Vignes until Dennis’ passing. When it was time to find a name for this new Carignan-dominated cuvée Valérie felt it was only appropriate to honor the US, and an American friend, after having honored Japan with the Atsuko. People have jokingly started calling this “the DRC from Mille Vignes,” even though Valérie chose to omit the “Clark” in the cuvée name.

IGP Pays de l’Aude Blanc “Le Pied des Nymphettes”
The nymphettes’ foot
Jacques had decided that punch-downs on this cuvée would be done by foot and by girls – “des jolies filles.” The cuvée name is an homage to them. 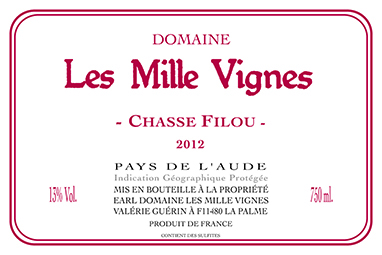 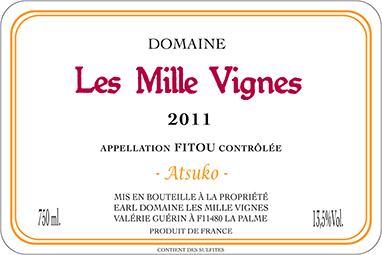 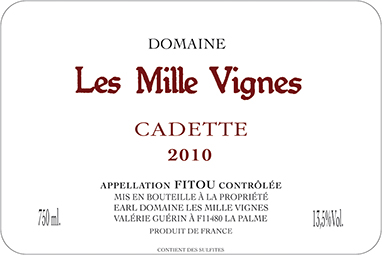 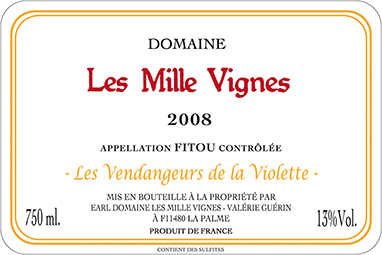 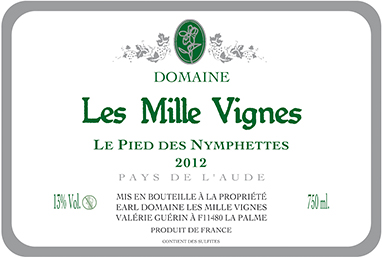