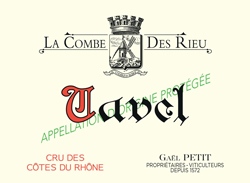 Gaël Petit’s family history is deeply intertwined with that of Tavel. Records show his ancestors inhabited the quaint, sunny Provençal village across the Rhône from Châteauneuf-du-Pape as far back as the 16th century, practicing viticulture for generations leading up to present day. His great-grandfather, a former mayor of Tavel and head of the local vigneron union, even played an important role in the foundation of the Tavel AOC, having outlined the production area eligible for France’s first rosé to receive appellation status in 1936.

Gaël recalls growing up at the family domaine, its cellars full of massive old foudres in which the wines were raised. These casks had been employed for decades, helping the family earn widespread recognition for its grandiose Tavels—the type of wine, undoubtedly, that enchanted countless connoisseurs throughout history including Louis XIV, de Balzac, and Hemingway.

But then, something changed: by the 1980s, the traditional casks had all but disappeared from cellars across France, replaced by the clean, dependable sparkle of stainless steel. Herbicides in the vineyard substituted tilling, laboratory yeasts colonized fermentation tanks, and other new developments like commercial enzymes, pumps, and filters became commonplace, facilitating the vigneron’s life and yielding a reliably consistent, albeit standardized, product each vintage.

A dependence on modern enology dictated winemaking when Gaël took the reins of the domaine in 1992, but following years of crafting a technological wine, he felt impelled to revise his methods. After all, Tavel’s exceptional terroir lends itself to the deep, complex rosés that enjoyed so much prestige throughout history, and deserves the hand of a dedicated artisan to bring out its full potential.

Gaël changed course, realizing that a shift was necessary for Tavel to relive its former glory, especially in the face of new threats to the region such as climate change. He began an organic conversion in the vineyards, having already taken steps toward sustainability during a stint as president of the AOC, when he mandated a reduced use of herbicides.

Gaël launched a micro-cuvée from a selection of old vines from the domaine’s top vineyard sites starting with the 2018 vintage. For this new departure, he opted for a whole-cluster, infusion-style vinification with native yeast, drastically reduced sulfur usage, allowed the wine to complete its malolactic fermentation, and bottled it without fining or filtration.

With an imposing character, “La Combe des Rieu” is a Tavel whose intensity, complexity, and decisive sense of terroir have more in common with the regal reds of Châteauneuf than with southern France’s sea of generic rosés. Behind the family’s historic 1930s label lies a wine of class, depth, and substance, bearing a rich bouquet of wild strawberry, flowers, garrigue, and sweet spices, culminating in a long, stony finale. In other words, this is Tavel the way it was meant to be—a rosé in name only that validates the appellation’s legendary standing as the “rosé of Kings.”

• Vines are trained in traditional gobelet style to protect from Mistral and shield grapes from sun
• Hand-harvested
• Wine is sourced from three parcels
• All parcels are co-planted and include small percentages of Mourvèdre, Clairette, Bourboulenc, Clairette Rose, Grenache Blanc, Grenache Gris, and Carignan Blanc
• Whole-cluster fermentation in tank with indigenous yeast lasts 8 days
• Occasional light pump-overs
• Wine completes malolactic fermentation
• Aged in stainless steel tank until June bottling
• Unfined and unfiltered
• Tiny doses of SO2 added during élevage and bottling
• Soil is known as lauzes, which refers to slate-like slabs of white limestone over a thin layer of clay; this terroir is typical of the combe du Malaven zone of the Tavel AOC. The combe is a large, east-facing amphitheater just west of the village, featuring poor, shallow clay-limestone soils (one of three terroirs in the AOC along with sand and galets roulés) 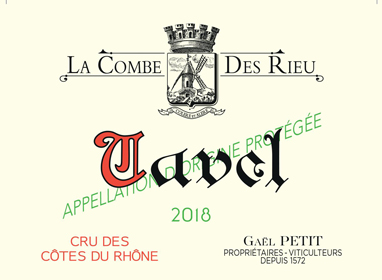 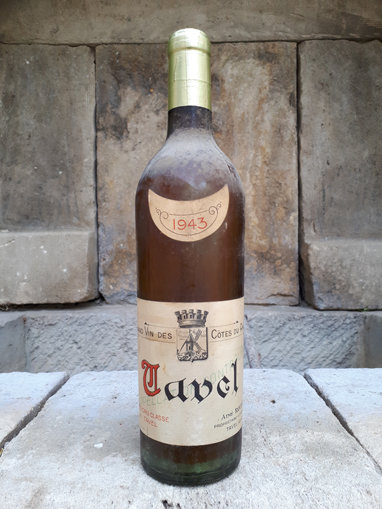 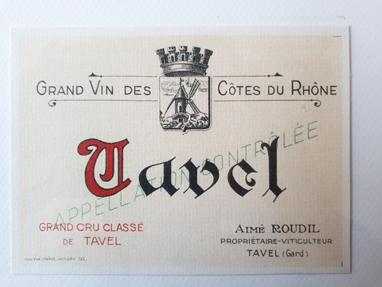