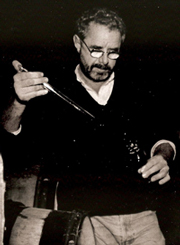 Little would we know that when Marcel Lapierre took over the family domaine from his father in 1973, he was on the road to becoming a legend. In 1981, his path would be forever changed by Jules Chauvet, a man whom many now call his spiritual godfather. Chauvet was a winemaker, a researcher, a chemist, and a viticultural prophet. It was he who, upon the advent of chemical fertilizers and pesticides in the 1950s, first spoke out for “natural wine,” harkening back to the traditional methods of the Beaujolais. Joined by local vignerons Guy Breton, Jean-Paul Thévenet, and Jean Foillard, Marcel spearheaded a group that soon took up the torch of this movement. Kermit dubbed this clan the Gang of Four, and the name has stuck ever since. These rebels called for a return to the old practices of viticulture and vinification: starting with old vines, never using synthetic herbicides or pesticides, harvesting late, rigorously sorting to remove all but the healthiest grapes, adding minimal doses of sulfur dioxide or none at all, and disdaining chaptalization. Sadly, the end of the 2010 vintage was Marcel’s last. He passed away at the end of the harvest—a poetic farewell for a man that forever changed our perception of Beaujolais. His son Mathieu and daughter Camille confidently continue the great work that their father pioneered, now introducing biodynamic vineyard practices and ensuring that Marcel's legacy lives on.

The methods at Lapierre are just as revolutionary as they are traditional; the detail and precision with which they work is striking and entirely different from the mass-produced majority of Beaujolais on the market today. Decomposed granite comprises most of their eleven hectares, and the vines are an average of 45 years of age. Grapes are picked at the last possible moment to obtain the ripest fruit, which is a trademark of the estate style. The Lapierres age their wines on fine lees for at least nine months in oak foudres and fûts ranging from three to thirteen years old. These wines are the essence of Morgon: bright, fleshy fruit with a palatable joie de vivre that was undoubtedly inherited from their creator. In the words of KLWM salesperson Sam Imel, “They are meant to be devoured.”

• Rigorous sorting of the grapes

• Mainly Sourced from two parcels that are just across the village line of Morgon
• Unlike with the entry-level Raisins Gaulois cuvée, this wine ages in barrel instead of tank, and is bottled in the spring instead of winter
• It is the mid-way cuvée between “Raisins Gaulois” and Morgon

• Almost all the grapes for this cuvée come from within the Morgon cru, but the wine is not entitled to the Morgon appellation because yields surpass the limit (56 hl/ha) permitted for AOC Morgon wines. This is intentional: the high yields prevent excessive concentration and yield an easy-drinking, fruit-driven red with low alcohol.

Juliénas “Cousins”:
• A wine produced by Mathieu Lapierre and his cousin Christophe Pacalet. Mathieu and Christophe each vinify their own cuvée of Juliénas and after malolactic fermentation they blend equal parts of each of their cuvées. After bottling, the wine is split evenly between the two vignerons.
• Traditional whole-cluster fermentation
• Fermented in conical wood tanks
• Aged in neutral barrel for 9 months

MISCELLANEA
Nobody’s wines taste like Marcel Lapierre’s. He is the source of a whole new school of winemaking, turning the hands of time back to wine the way Mother Nature envisioned it. Tasting it can change the way you taste wine.

Our ideal is to make wine from 100% grape juice. 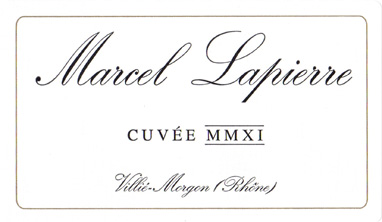 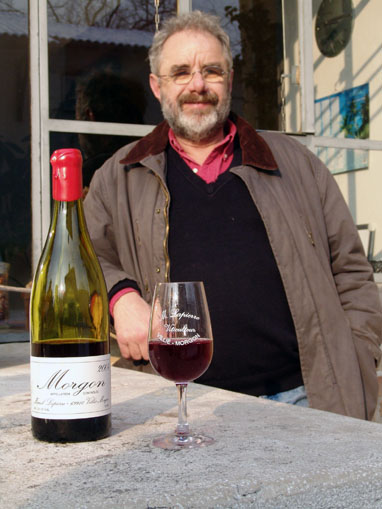