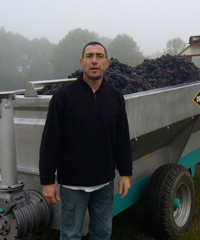 The Bugey is one of the best-kept secrets of France. A geographical crossroads between Savoie, the Jura, Burgundy, and the Rhône, this small region encompasses the mountainous eastern half of the Ain département. Situated between Lyon and Geneva, it is not considered a part of Savoie or the Jura, administratively or as a wine region. It is really its own little enclave, home to steep calcareous mountainsides butting up against the western edge of the Alps, and subject to Alpine, continental, and Mediterranean influences to climate.

The slopes of the Bugey were likely first cultivated by the Romans, and later valorized by medieval monks. Still, the region had to wait until 2009 before receiving its own AOC. With less than five hundred hectares planted, production is marginal, but its remarkably steep, stony terroirs show immense potential in the hands of ambitious vignerons. Today, Cerdon is considered one of three crus within the appellation of Bugey, and the only one whose entire production consists of sparkling wine.

In La Cueille, one of seven high-altitude hamlets surrounding the historic medieval town of Poncin, Patrick and Catherine Bottex—recently joined by their son, Carl—farm the rocky limestone slopes above the Ain River. They have been working five hectares of land since 1991 and produce only a small quantity of their beautiful, intriguing sparkling wine. While a number of grape varieties are permitted in the Bugey, including Altesse, Chardonnay, and Mondeuse, the wines of Cerdon are dominated by Gamay. Chez Bottex, ten percent Poulsard, imported from the Jura just to the north, fills out the blend as a secondary cépage. They craft this irresistible low-alcohol rosé using the méthode ancestrale, a rare technique that predates the méthode champenoise. In the cellar, the grapes are pressed directly after harvest, and the must begins a natural fermentation in cuve. When roughly 60 grams of sugar remain, the tanks are cooled down to halt fermentation, and the wine is bottled under crown cap. A secondary fermentation begins spontaneously as the bottles are laid to rest for the winter, until the rising pressure causes fermentation to stop once again, having consumed roughly 20 additional grams of sugar. The bottles are then disgorged and filtered to avoid unwanted refermentations, and bottled under cork. The resulting wine is delightfully refreshing with bright fruit, crisp acidity, a beautiful deep pink hue, and a tantalizing touch of sweetness.

Kermit had never heard of Bugey until Marcel Lapierre uncorked a beauty at one of his after-tasting parties. His best memory of drinking it, however, was from an ice chest at a hamburger barbecue on a beach in Hawaii. From the Bugey to Waimanalo!

• Grapes are harvested by hand
• Made by direct press
• Fermentation is natural
• The wine is bottled partway through fermentation
• After approximately 2 months, fermentation has stopped
• The wine is then re-corked and ready to drink
• Residual sugar varies from year to year, typically around 40-60 g/L, depending on acidity
• All grapes come from a single vintage, but the wine is not vintage-dated 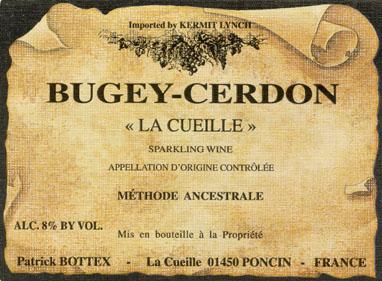