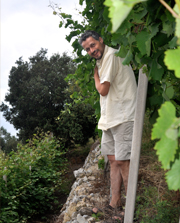 The tiny village of Varigotti sits on the Mediterranean, just a few rows of houses and restaurants on a pristine beach, with its back against steep hills. Climb up into the hills and you will discover neatly terraced vineyards on the slopes and in hidden clearings further up on the peaks. The Ruffino family has been tending these vineyards for over 500 years, hardly changing a thing as they pass their knowledge and wisdom from one generation to the next. Today the estate is run by four siblings: Tommaso, the eldest, is the winemaker; Paolo is the salesman; Anna handles logistics; and Nicola helps out in the vineyards and winery. Their mother, Libera, was a strong businesswoman who revolutionized sales by dealing directly with clients rather than working with the merchants who controlled the market at the time; but today she stays in the background, happily cooking for the constant flow of guests and tending the home-grown vegetable stand in the courtyard as her numerous grandchildren scamper around her. These unpretentious people are firmly rooted in Varigotti, and the wines they craft are infused with local tradition and character.

Ask Paolo if the family follows organic methods in the vineyards and he’ll laugh. We’re not “organic,” he says as if you had asked about some crazy new technology. We just do everything the same way our ancestors have for hundreds of years. They even build their stone terraces by hand, using the method established here three thousand years ago. The vineyards of Punta Crena (which is named for a large promontory jutting into the sea at the edge of the village) are all within 1200 meters of the water and enjoy sea breezes that help keep the grapes healthy and happy. The Ruffinos are proud to work almost exclusively with local varietals, but they don’t have much company. Mataòssu, which once reigned supreme in this zone, was gradually ripped out because it has such a difficult vegetative balance; Crovino gives such low yields that no one else will grow it. As a result, several of Punta Crena’s wines are one of a kind: the Mataòssu and Cruvin are entirely unique (two other producers make wines labeled Mataòssu, but in fact their vines are the related Lumassina), and the Barbarossa is the only one produced in Italy (a local grape of Emilia-Romagna has the same name but is unrelated). They believe that their only job after the harvest is simply to avoid ruining their lovely fruit as it turns to wine. These are light, fun wines with no pretension. Every bottling from this estate marries beautifully with the local cuisine of fresh vegetables, fritto misto, and anchovies prepared every way imaginable, and we at KLWM are constantly finding more pairings where they taste just as good.

• All vinification in stainless steel

• No machines are used for pumping over; the pressure resulting from the release of gas during fermentation is used instead

• Wines are neither filtered nor fined

The rocks in Varigotti have an unusually high aluminum content; as the rock breaks down the aluminum is released and washes into the clay soil, where over several years it oxidizes and turns red. This soil is found only in Varigotti and certain areas of Provence (which is just a few hours away by car).

The native Mataòssu (pronounced mah-tah-OHSS-soo) dominated the vineyards of Varigotti in the 19th century, but its delicate vegetative balance provoked most winegrowers to rip out the vines in favor of less finicky grapes. Today only three producers have wines labeled Mataòssu, and the Ruffinos assure us that the other two are actually Lumassina.

The native Lumassina (loo-mahss-SEE-nah) is a cousin of Mataòssu and has a similarly difficult vegetative balance. Punta Crena’s still bottling has a snail on the label because the grape ripens very slowly (it is also a pun on the name Lumassina, which resembles the Italian word for snail, “lumaca”).

Cruvin (croo-VEEN) is another fussy native grape that gives tiny yields, so the Ruffinos are the only family now producing it. The name Cruvin means “to fall” in local dialect because the grape easily falls off the vine when it is ripe. The fox on the label is sitting under the vine waiting for the grapes to ripen….

Pigato is a genetic variation of Vermentino that developed around the 18th century and was probably named for its pighe—“freckles” in the local dialect, referring to its spotty skin. Today the two varieties are often confused because they are frequently planted together and cross-pollinate in the vineyards, but the difference is evident when they are kept separate, as at Punta Crena. In order to demonstrate this distinction scientifically the Ruffinos are planning to provide cuttings of their own vines to a local university for comparative genetic testing.

This is yet another unique wine since it is the only Barbarossa produced in Italy (although a distinct grape variety grown in Emilia-Romagna coincidentally has the same name). The grape is quite pale (as seen on the label) and gives a rosé wine even after a full 15-day maceration. 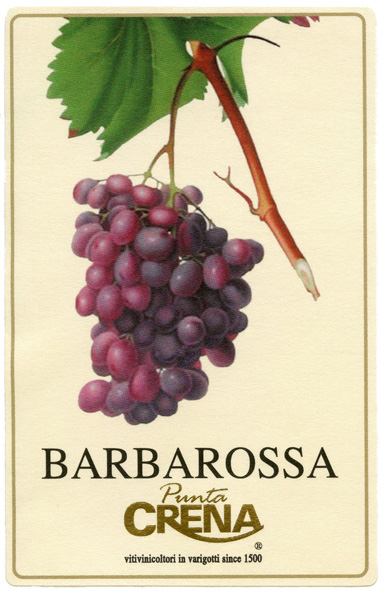 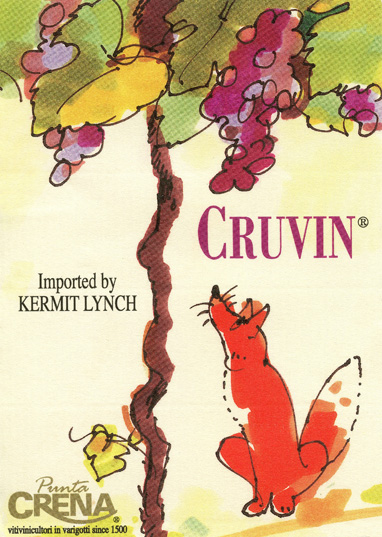 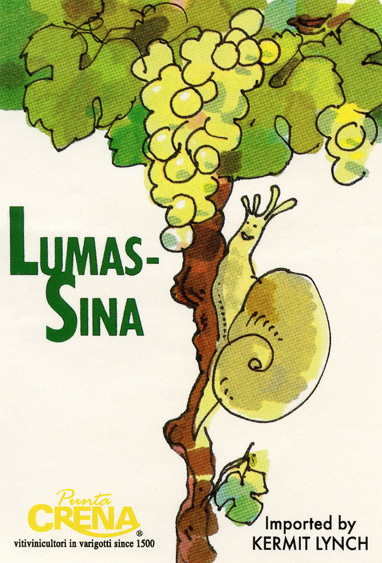 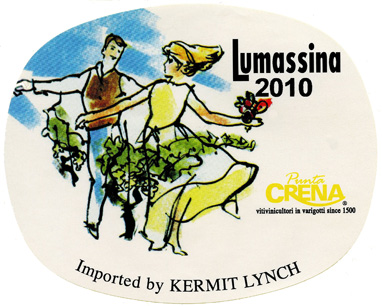 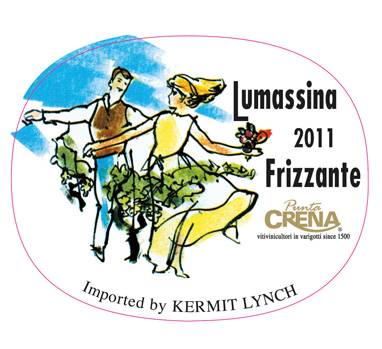 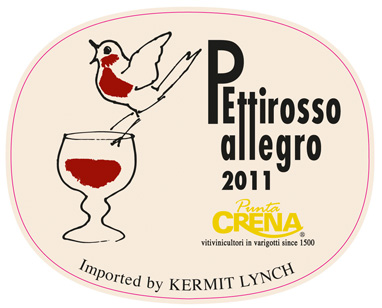 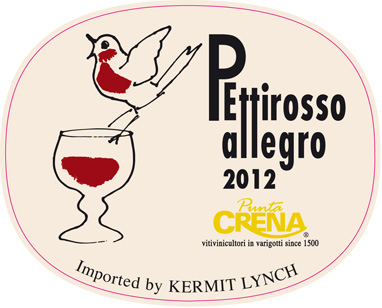 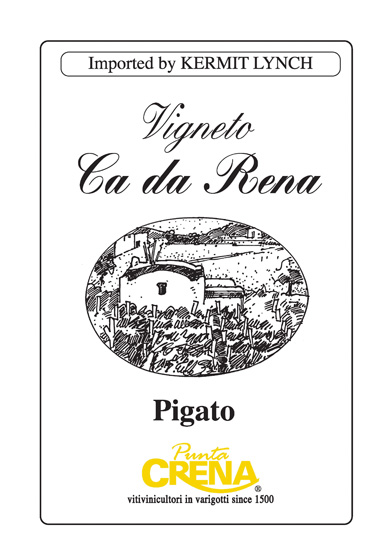 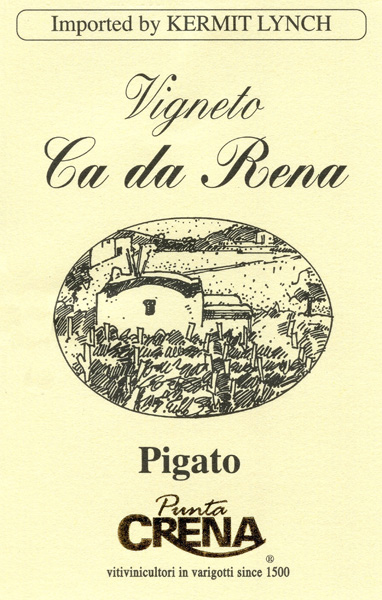 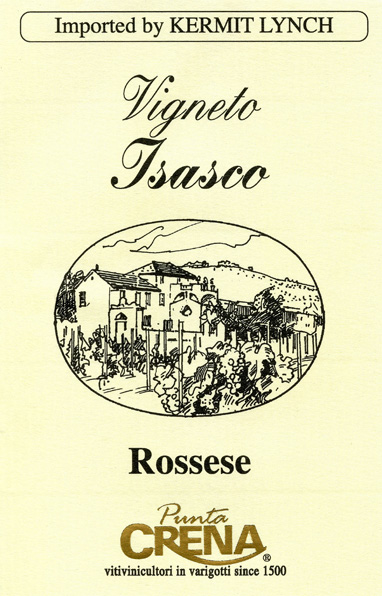 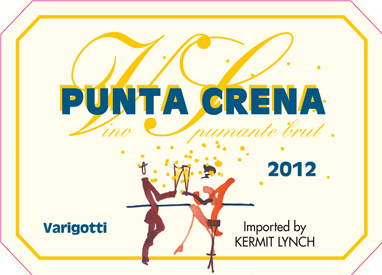 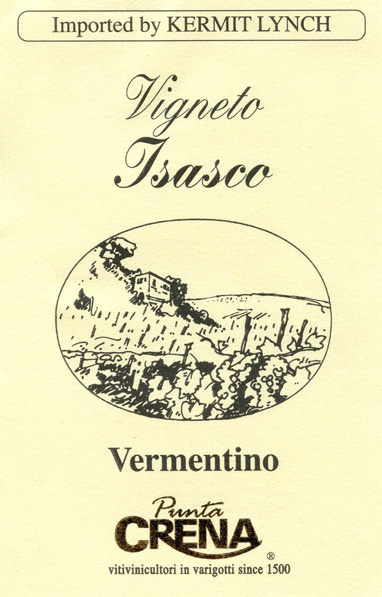